What is a physical intervention?

Physical intervention and unarmed combat are vitally important for a close protection officer to be extensively trained in to carry out their duties safely and effectively. Part of a close protection officer’s (CPO) job is to know exactly what course of action to take during a potentially hostile confrontation with a volatile person or group that may pose a threat to the principal (VIP) that they are protecting. Physical intervention is one potential solution to this type of high risk scenario, allowing the CPO to subdue the threat and extract the principal to safety.

What does physical intervention mean?

The term ‘physical intervention’ refers to the act of using force with the ultimate aim of limiting the movement of a person who is posing a threat. Not only is this to prevent the person from causing harm to the principal and CPO, but also to decrease the chance of legal consequences and damage to the principal’s brand and reputation. When the freedom of the person is limited, they become less of a danger. Due to this factor, restrictive physical intervention is something that a CPO must be experienced in carrying out successfully. During any confrontation, a CPO will need to assess what level of restriction, if any, is required. Typically, this will involve having to choose between acting in a highly restrictive way with an especially threatening individual or a low level restrictive way for someone who is less resistant to force. Often it is easier for the Personal Protection Officer (PPO) to extract the principal to safety while the rest of the protection team not involved in the extraction engage the threat.

What is non-restrictive physical intervention?

Although restricting a potential threat is an important part of physical intervention, it is possible to use non-restrictive physical intervention if it’s necessary for the specific situation. By using this approach, the CPO is able to invite the individual into walking away from the confrontation using effective conflict management and negotiation techniques. By moving the subject away from the area to entirely dissipate the threat, the CPO is preventing harm from being caused and decreasing the level of hostility in the situation. This would be the ideal solution that the CPO would take, as it would avoid physical conflict, but it’s often the case that restrictive intervention is required in order to subdue and inevitably physically de-escalate the person posing a threat.

What is physical intervention training? 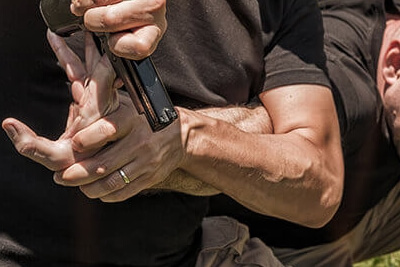 Physical intervention primarily focuses on defusing violent situations, but training in this skill also features guidance on how to escort the principal while shielding them from potential threats. As it is the job of the close protection officer to protect the principal from any form of attack, unarmed combat training plays a key part in this type of training. Good unarmed combat training should include conflict management training which will help a CPO to determine potential threat levels and the actions needed to dissipate it, close quarter combat for disarming potential attackers of firearms, and more extensive areas of combat training such as body cover and situation awareness, ground defence and counter attack, and multiple attack scenarios.

What are the different types of physical intervention in security?

In its simplest terms, the aim of physical intervention is to control a threatening situation and avoid injury to anyone involved, all while maintaining a duty of care to any attacker throughout a situation. Depending on the attacker, the threat they’re posing and how the situation plays out, things could go in a number of ways. That is why there are three different types of physical intervention to help with assessing the level of threat. These are listed as control measures, with the focus being on suitably addressing the situation to completely eradicate the danger. The three control measures in security are:

Primary controls – Planned and assessed beforehand, primary controls focus on reducing the likelihood of volatile situations and decreasing the frequency of how often they may occur. Anticipating potential conflicts can come in many forms, with a CPO typically using a risk assessment to establish the area they’ll be in, how the principal will be escorted, vetting other members of staff in the area and deciding on whether additional cover is required. Another part of this is reporting past incidents as a reference to avoid the same thing happening again in future incidents, possibly learning from how details were missed or underestimated in becoming a threat.

Secondary controls – Coming into action during a conflict, secondary controls look at the protocol for preventing a hostile situation from escalating and worsening. Communication between a CPO and the person posing the threat is often used as a secondary control method. If the CPO is capable of talking to the person and calming them down verbally to reduce the level of threat, this is a successful example of a secondary control in action. That’s not saying the situation won’t escalate into being a physical intervention, although this should be a last resort. In extreme situations, it could be more effective to include other members of the team to reduce the level of threat, especially if the person is equipped with a firearm in more hostile environments or if there are multiple attackers.

Tertiary controls – During or after a violent situation has occurred, tertiary controls will be considered in an attempt to avoid physical or psychological damage from the incident. There are many factors involved in these controls, with the primary focus being the act of disarming the attacker through physical intervention, emergency procedures and the implementation of physical restraint. After the incident is over, the CPO will be involved in supporting the victims until they’re assured of their physical and mental state. As a final measure, the CPO will conduct an extensive review of the incident to see what could have been avoided and what they can learn from in future incidents, which brings the process full circle back to the primary control methods. Providing the incident review helped to prevent future dangers, the extent of tertiary measures may not be needed as much after future incidents.

Client Management for Conor McGregor in Las Vegas for UFC 246

Why is risk management important?